Viparspectra 1200w LED’s full spectrum provides plants with the right amount of light to grow healthy. It is equipped with aluminum cooling heat sinks and high-speed fans that work quietly to dissipate heat. The LED grows light consumes only 524 watts and is covered by a 3-year local warranty and a 30-day satisfaction guarantee. You can use a timer to save more on your utility bills. Read this Viparspectra 1200w LED review and learn more about this device.

You can use the 90⁰ focus lens to adjust the light for maximum coverage once the plants start to bloom. The Viparspectra 1200w LED is equipped with high-speed fans and aluminum cooling sinks that reduce heat.  The fans are attached to the light tray to provide the best cooling effect to the system. The LED unit produces 70% less heat than others with light options. It can grow plants during the bloom and veg phases. Make sure that there’s enough headroom in the grow space to maximize the benefits of this device.

The LEDs balance PAR and Lumen output to give the full light spectrum that plants require to grow. The unit has secondary optical lenses that amplify the PAR output. According to some customers, the grow light works well for the flowers at the upper level but doesn’t provide the best results when the canopy is thick. Others say that it works extremely well for the vegetable phase, but provides mediocre results for the blooming phase.

Pruning and thinning can help solve the problem. However, this is not the best idea for those who prefer a dense canopy of flowers. You can put moving lights on the side rails to ensure that each layer is well lit. If you don’t do this, only the flowers at the upper level will grow well, and those at the lower level won’t look good.

Viparspectra uses a combination of Bridgelux and Epileds, both well-known LED manufacturers that makes quality chips. They use chips in the following spectrum ranges:

This is a full spectrum LED array, meaning it’s possible to grow most plants through their entire life cycle without having to switch lights 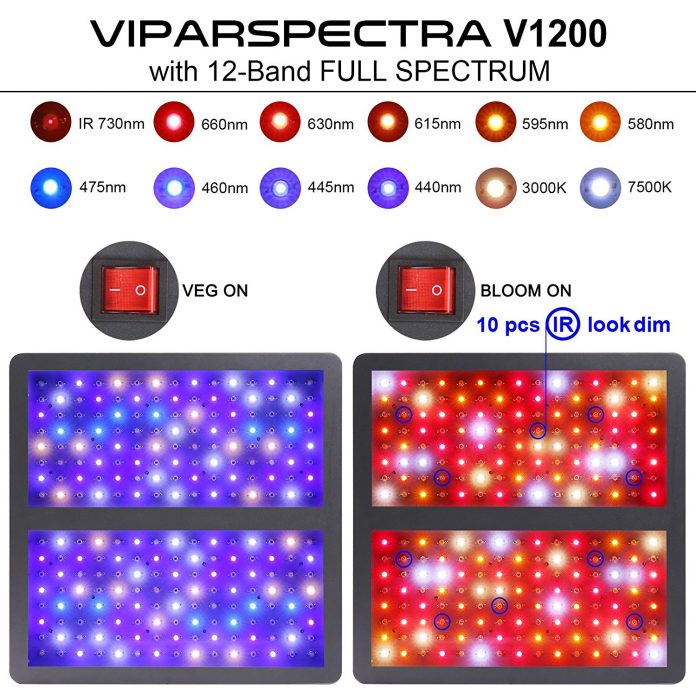 With the Viparspectra 1200w LED, you don’t need to worry about moving lights or plants around. The unit disperses light, so all plants in the covered area will grow well.

The plants get the same amount of coverage throughout the grow area as the LED unit covers a 4′ x 4′ area at the height of 24″. It can cover up to 16 plants. The LEDs are powerful enough to penetrate the upper canopy, which helps maximize the yield in the blooming phase.

The Viparspectra 1200w LED is also controlled by a timer. You have to wear sunglasses when tending to the plant. Don’t look directly into the unit. The package includes one 1200W grow light, one hanging kit, and one 6′ power cord.

The ViparSpectra may be rated as a 1200W product, but it doesn’t consume this much energy. According to the manufacturer, it only consumes 524W. If you are looking for an energy saver, you can definitely benefit from this and you don’t need extra ballast to use the unit.

The ViparSpectra 1200W LED is 3″ thick and weighs 5.6 pounds. Having it lightweight, you can move it around with ease.

Just like any other product, the ViparSpectra 1200W LED has its own flaws as well. One of these is that you need to hang the grow light at least 24″ above the plants because if you put them any lower, you will burn the plants.

Some customers have also complained that the rear of the unit gets quite hot. The lights are extremely powerful, so you may need to conduct a test batch first to ensure you don’t end up burning the plants. The ViparSpectra 1200W LED is not water-proof. It is designed to be only used indoors.

The ViparSpectra 1200W LED is a good option for those who are looking for an affordable lighting system that works well. You can use the unit to start a large scale project due to its large coverage and powerful LEDs. The ViparSpectra 1200W LED is also backed by a 30-day satisfaction guarantee and 3-year local warranty, so you can have peace of mind knowing that your investment is safe. If you are not happy with the unit, you can return the unit and get a replacement or refund.